Home / Positivity: Sunshine and Rainbows / Look Who Found Success After 40

Everybody seems to have their lives figured out by 30, or so it seems. At that point you should either be happily married and with a cute little toddler, or single but taking the corporate world by storm. Your bucket list should start getting crossed out bullet after bullet, your savings growing, your paycheck steady, and your life experiences expanding.

Social media makes it even more intimidating. With a chock-full of millennials living their lives worry-free, travelling here and there, and oversharing their perfect romances, they’re unknowingly setting the bar higher for when you need to be successful and ready to settle down.

But what if you’re simply not there yet? Don’t worry, because as they say—and don’t take this as cliche—it’s never too late. Age is just a number, and everybody has one. If you find yourself rolling out of your thirties or well in your forties, take inspiration from this list of people who made it later in life, and remind yourself that everything is just a matter of timing.

Vera Wang is a New York-based fashion designer born to Chinese parents who moved to the US in the 1940s. In her younger years, she has trained and competed as a figure skater. But after failing to enter the US Olympics team, she entered the fashion industry as an editor. She was 40 when she quit writing and started designing, which later led to her opening her first fashion boutique in New York, featuring her trademark bridal gowns.

Attribution: By Christopher Peterson [CC BY 2.0 (http://creativecommons.org/licenses/by/2.0)], via Wikimedia Commons.

Vera Wang’s dresses have been worn by many famous public figures such as Victoria Beckham, Mariah Carey, Kim and Chloe Kardashian, Chelsea Clinton, and Michelle Obama.

The man behind Spider-Man, Iron Man, X-Men, the Hulk was once an assistant in a comic book publication filling inkwells for artists, getting them lunch, and erasing pencil marks off their artworks. From his humble beginnings he rose to become the owner and chairman of Marvel Comics, the small publishing house he used to worked for.

He was 39 when he made his first hit comic, Fantastic Four. Following that success, the Marvel universe was created and more heroes were born. 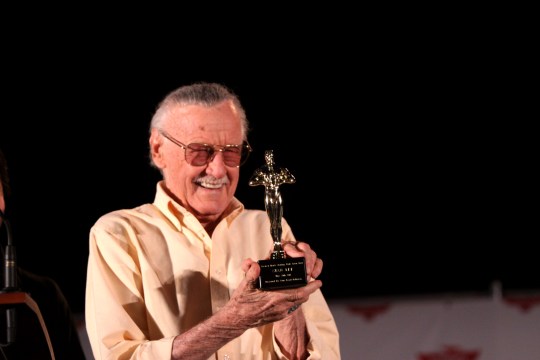 If you want to thank someone for supplying your cupboard with your favorite emergency food—that is, cup noodles and instant ramen—here’s the guy. Mamofuku Ando  invented cup noodles in 1948, shortly after World War II, in hopes of making affordable food for the masses. Ten years later at age 48, he sold the first instant ramen.

Momofuku Ando was highly regarded for his contribution to society and has been honored multiple times by the Japanese government. Did you know that there’s a museum in Osaka, Japan devoted to instant ramen?

Sam Walton used to manage several Ben Franklin stores with his brother. Later on, he saw a great opportunity in opening large discount stores in small rural towns but management just wouldn’t approve of expanding that way. That led him to leave the franchise and create his own empire.

After years in the retail management business, Sam Walton opened the first Walmart at age 44 in a small city in Arkansas.

Sam Walton appeared in the list of Time’s 100 Most Influential People of the 20th century, was ranked by Forbes as the richest person in the US from 1982 to 1988, and was awarded a Presidential Medal of Freedom by George H.W. Bush.